A penny saved is a penny earned. Unless you are talking about Government spending.

When it comes to individuals saving money, every penny counts. It adds up. There are even tricks like save a penny today, two pennies tomorrow, four pennies the next day and next thing you know, you have a jar full of cash.

However, when it comes to government spending suddenly $8 million for gender reassignment surgery for military personnel is just $8 million. Or the media and politicians come up with ways to make $8 million seem like nothing much. It is ONLY 0.04% of the money being spent on the military, if the money doesn’t go there it will go somewhere else or by bringing up other expenditures that can be considered wasteful.

As for the percentage being ONLY a small part of the spending. Who cares? Money is money, whether it is tax payer money, Mommy & Daddy’s money, or earned payroll money. I don’t care if it is 40% or 0.0001% of a total amount of money, it is money and should not be belittled because it is ONLY a small percentage of the whole amount.

When it comes to money being spent elsewhere, that is fine if it is going toward something approved by a large percentage of tax payers or it truly is a necessity. When it comes to the military I would rather have an extra $8 million go towards purchasing better body armor for the soldiers, than having it go toward sex change operations.

When it comes to individuals saving money, money should not be taken for granted. The money is ONLY money, mentality is a reason the U.S. economy is swirling around at the bottom of the toilet bowl, the U.S. Government keeps spending increasingly more money, and it is the mentality that helps to keep the poor, poor. Just because the government is the one spending the money doesn't mean the money doesn't add up. I don't care if the government can save $100,000 here, $10,000 there, or $4 million over there, if they can save it they need to save it. If it can go to an issue that has more American tax payer approval, move it to a more approved issue. If the Government can find ways to spend less, then hopefully the tax payers will eventually have to give less. 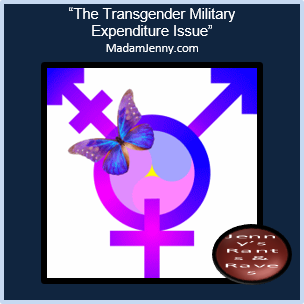