I was doing an image search for background scenes of rioters. I wanted to set up an inspirational meme and I felt a riot scene would work. I didn’t specify race or gender. The only specification was in America. My exact search was “rioters, America”. The results included people of all racial backgrounds, and a few included people dressed in costumes, mainly clowns. Either way I noticed a number of photos were linked to pages that had the phrase “Double Standard” in the title, so I finally decided to click on a few and see what it was all about.

It turned out it spoke about how riots started by mainly black folk make national news and are dragged through the coals by viewers, but riots started by mainly white folk are not dragged through the coals on a national level. The blogs all seemed to blame white people in general. I hate to break it to people, but the viewers, including white folk, don’t have a whole lot of control on what is or is not reported on a national level. At the end of the day what makes national news is not what the viewers are choosing or not choosing, but whoever is ultimately in charge of the mainstream media and when I say mainstream media I mean the original top newsfeeds ABC, CBS, NBC and Fox News. Fox is not quite original but it still managed to make it up there. CNN and Headline News managed to make that top group of newsfeeds also. Now, I have no clue if there is some ultimate group of people who say what is or is not considered national news, or if there is another group in charge of that group and so on. Those running the US Government behind the curtains may hold the power. Hell, for all I know the main influence comes from those in power of the United Nations or maybe England never fully released its grasp on America after the Revolution. Whoever the ultimate group in power happens to be, it will never be made public, at least not on purpose. If it were made public they would instantly be a target by someone or some other group, it would open the doors to numerous legal issues and so on.

Knowing who is or is not in power in some global level is not important at the moment. (I say global because “race baiting” and most of the other bullshit is not only happening in the USA. It is occurring in numerous countries across the globe.) What is important, is “common folk” across the globe do not fall for all the bullshit. When it comes to rioting, I don’t care what color the majority of rioters and looters happen to be, it is wrong. I don’t care what the reason is for rioting and looting, it is wrong. I don’t care if the rioting occurs in a big city or a small town, it is wrong. Who knows why the mainstream media keeps it quiet. It is assumed race is an issue, but most of the riots started by a majority of white folk were due to a football or baseball team winning or losing. That is a seriously, stupid reason to riot and loot. However, rioting over a sporting event may hinder the NFL or the MLB and maybe that is enough to keep it all quiet, who knows and who cares. The reason I say who cares, is not to belittle any of the rioting, but no matter the minor reasons for picking and choosing what goes national and what doesn’t is small time compared to the main reason which has always been controlling the masses.

How better to control the masses than with news and information. If you want to create a race war the national news needs to make one race bad compared to another race. If the mainstream media only pushes black riots, people who live hundreds of miles away from any riots will only read about what the mainstream media promotes, which is black riots. One cannot blame society for thinking only black people get into riots when the media only makes black riots go national. If you want to blame someone blame the mainstream media or those in charge of it. I say, those in charge of it because for whatever reason all the top news feeds, instantly pick a distracting issue simultaneously. Off shoot news groups join in so many days later, but on day one it is a total coincidence that NBC, CBS, ABC, Headline News and FOX have found the story and all ready to shove it right onto the viral rollercoaster. The mainstream media chooses to promote one over the other. That is why Bill Clinton has gotten away with rape and forcing women to commit whatever sexual acts. If the media was truly fair, Bill Clinton's victims would be getting more attention than Donald Trump’s words.

When it comes to the so called "balanced news" it is not about reporting all the issues or being objective about it, it is about making sure the scales are properly balanced to control the masses and to create whatever issues in society they feel fit should occur. Who knows why, it could be to keep the masses distracted while different issues are being voted on in the House and Senate. It could be to maintain a distraction while the current government participates in any actions that would upset the majority of the people. The white viewers across the US are not writing to the mainstream media saying “hey I only want you to report about the black crime across the country and ignore the white crime”. No, nobody's writing those letters. The mainstream media is choosing to report one over the other in order to give the people a certain viewpoint about society.

So next time you have an issue about what is in the national news don't point the finger at white people, black people, Republicans or Democrats, point the finger at the mainstream media and hopefully they will listen and maybe one day they will give up the names of those they have been bowing down to for so many years. If that group of people, who have been pulling all the strings, happens to be white that is not all white people, it is that group of white people. If that group happens to be Democrats, it's not all Democrats across the US, it is that group of Democrats. The reason why so many issues never go away, is people spend too much time blaming those who are not at fault. While those who are at fault, sit behind the curtain laughing about everything they manage to get away with. 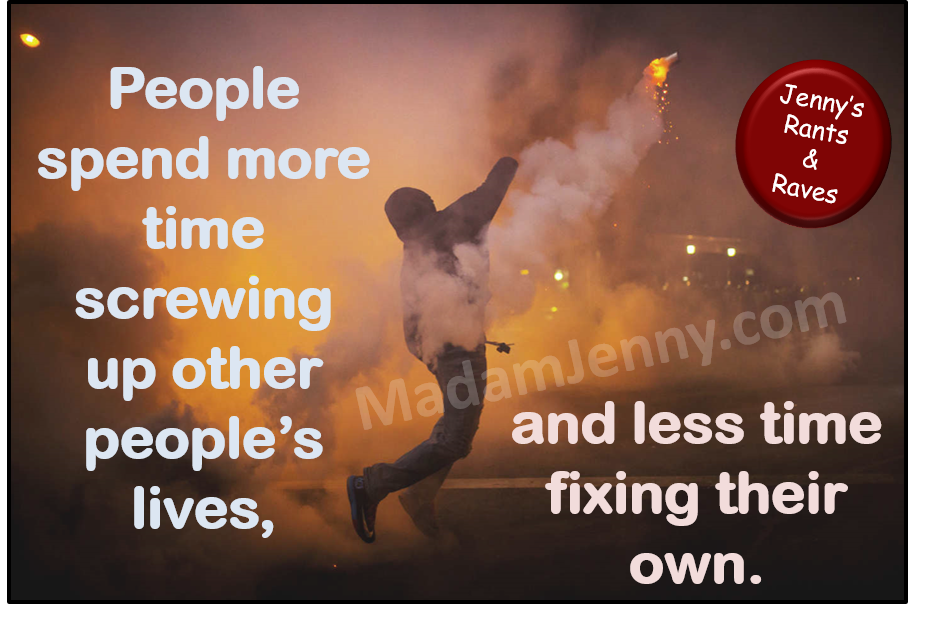