I think the ‘true numbers’ will stay the same during most of the 2016 Presidential Election. When I say ‘true numbers’ I mean the numbers that are not documented, but are the true realistic numbers of the voters. The numbers, no one will know about until voting day.

In 2012 most Republicans did not seem to care for their options. Plus, from the start the mainstream media had already picked Mitt Romney and made sure he rode the wave all the way to being the GOP candidate.

In 2016 the media did not have that privilege. The media instantly put Jeb Bush on the wave, but he was quickly washed out and the media moved on to Marco Rubio. The whole time being forced to give Donald Trump attention. Donald Trump made sure to create enough drama and attention the mainstream media had no choice, but to pay attention to him. Some of his over the top attention getters is one reason so many voters think twice about voting for Trump, but what other option did he have? The mainstream media made their choice and it was not Donald Trump. So, Donald Trump utilized the public. Bloggers started blogging, graphic artists started producing memes, smartphone owners started posting videos and pictures of Donald Trump and his numerous shenanigans. Obama tried to restrict bloggers and smartphone users by restricting online ‘journalism’ to only those who are licensed or certified. However, the people and the First Amendment won, and the mainstream media was forced to report Donald Trump’s activity whether it was good or bad if they wanted their readers and viewers to stick around.

Now that the primaries are over and Donald Trump is the GOP candidate, he is able to mellow out…a bit. At first the mainstream media reported both candidates, then they veered away from Donald Trump, so he tossed in a few attention getters and the media was back. Hillary Clinton started fainting and rather than admit she was sick, she kept it all top secret. She did a better job at keeping her pneumonia or whatever the hell is wrong with her a secret than she did tens of thousands of classified emails. Since she was constantly missing in action, the media had no choice but to report about Donald Trump. It was either that or act as if there was no presidential election this year. They could have increased their attention toward Gary Johnson and Jill Stein, but why would the mainstream media give a 3rd party a chance to earn their spot in the debates?

Ultimately 2016 is not a flip a coin decision. Both candidates are totally different, even though the media would like everyone to think they only differ by gender or to be more specific, male/female reproductive organs. To start most of their issues are on opposite sides of the political spectrum. Hillary is government sector and Trump is private sector. Hillary is a hard core Democrat and Trump is a Right Leaning Independent. Hillary being in the political arena, even as first lady and as a politician’s daughter, has made many of her political choices and issues official by voting yes or no in the senate, making political speeches, and so on. Most of Trump’s history on issues and political choices are not official. Some of the Trump quotes used by the left were nothing more than lines from a script for his reality show, publicity radio segments and hosting beauty pageants. Who knows what his words would have been back in the day if he was also going to make a vote that would affect the lives of millions. Odds are he would have done more than just read the script or make a joke about it, since his goal before running for office was to bring in more viewers and customers.

Now that he is making the switch from private sector to public sector he is catching up on many issues. When he first started campaigning one could tell most of the information he had was from the same source everyone else depended on, the mainstream media. Now he has had the chance to find out more in-depth information and have the opportunity to visit with foreign leaders and ask about US/foreign issues not just where to put the next hotel/casino with a golf course.

The “post-debate bounce” may not occur in the media polls. Most people are set in their vote and this election may have less undecided voters than most Presidential Elections. 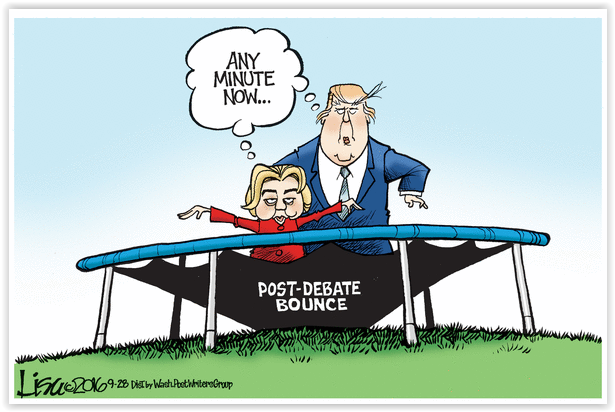