It is not to limit people to only voting for Donald Trump. Gary Johnson and Jill Stein are still options, but don’t push for others to join into the Never Trump philosophy. Don’t vote for Hillary Clinton in order to stop Trump, as if she is going to be any better. Ted Cruz finally endorsed Trump, and at this point in the campaign Johnson and Stein don’t have the numbers to beat Trump or Hillary. Hillary Clinton has promised to maintain Barack Obama’s agenda and fulfill whatever goals he has not achieved. If Trump was not your first choice, oh well, there is no promise everything will always work out in your favor, but don’t get pissy, have a temper tantrum and help Hillary win. 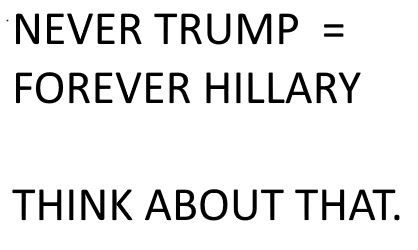